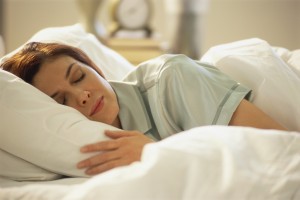 Nothing can make someone crankier than missing out on a good night’s rest.

Sadly, research shows 30%(seems low doesn’t it?) of all Americans don’t get enough sleep because they suffer from chronic insomnia.

(Hmmm… maybe that’s why most people don’t say much in the morning boot camps!)

Either way, not sleeping well can severely impact your mood and ultimately your health.

Big pharmaceutical companies have tried solving this problem ineffectively with sleeping pills. But these don’t work as well as promised and come with a healthy dose of side-effects.

The good news is that there is a perfectly all-natural sleep-inducer you can take whenever you’re having trouble falling asleep.

In fact, you probably have it in your refrigerator right now.

I’m talking about milk.(go for the skim!)

For decades, moms across the country have given their kids a glass of warm milk before sending them off to bed.

And as it turns out, there’s some solid science to back this “tradition” up.

Research has discovered that milk has a set of nutritional compounds called bioactive milk peptides that can help you get a restful night of sleep in addition to calming you down.

These bioative milk peptides work specifically on the brain’s GABA-A receptors; much in the same way certain pharmaceutical-grade sedatives work… without all the nasty side effects.

But that’s not all…

Research published in the European Journal of Nutrition shows that these same bioactive milk peptides can reduce your body’s cortisol (“stress” hormone) levels. [1]

Over 40 healthy male participants were divided into two groups. One group that received bioactive milk peptides and a control group that did not.

Both groups were subjected to psychological and physical stress, through the administration of numerous tests.

The researchers then measured concentrations of cortisol, heart rate and blood pressure at specific intervals.

As expected, the group who received a placebo had a spike in cortisol that’s typically caused by stressful situations.

In comparison, the group that supplemented with the bioactive milk peptide saw a NET reduction in cortisol levels of -20.69 percent.

Put simply, the milk peptides literally kept cortisol under control, limiting the detrimental effects it can have on your

But the research on milk’s ability to put you to sleep doesn’t stop there.

Its efficacy at helping sleep was also studied in a placebo-controlled study that recruited 32 participants with a history of insomnia.

The study, published in The Open Sleep Journal, gave the subjects in the test group 150mg of bioactive milk peptides one hour before bedtime every day for 30 days.

After just 14 days, the participants who received the supplement experienced a 50% improvement in sleep quality.

And by the end of the 30-day study, they reported needing 30% less time to fall asleep and even felt more alert and energetic.

Sleep quality and sleep efficiency was improved, even in those participants who suffered from moderate symptoms of anxiety and depression. [2]

So if you ever have trouble sleeping, take mom’s advice and drink a glass of warm milk(stick to skim milk when fat loss is your goal)

If you are lactose intolerant, you could find the bioactive milk peptides in supplement form -most likely at your local health food store.

Either way, make sure you get your “zzz’s”

Sleep is just as important as working out and eating healthy.

Without enough sleep, you won’t function at 100% capacity. So make sure to give it the importance it deserves. You’ll feel a lot better for it!

P.s. When I interview clients the first thing they notice after they start my program is they sleep better. Usually better than they have in years! If you’d like to set up a free consult to help you discover how fast you can start feeling better. Click Here=>FREE Health and Wellness Consult