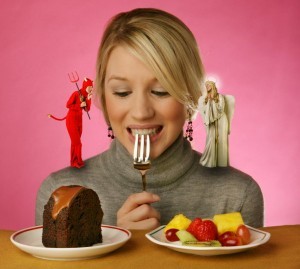 Temptation, when it comes to sticking with your diet, may not be a bad thing.

In fact, it can even help you!

Before I share the details of the study I found with you, let me just say that I’ve always believed that success at staying lean and healthy (or success at anything in life, for that matter) requires the correct mindset or mental attitude.

Without the right mindset, it becomes too easy to fall apart the first obstacle.

On to the study…

A research paper published in the Journal of Personality and Social Psychology, studied two groups of people – those who were successful at achieving their long-term goals and those who weren’t.

It turns out there is a small shift in perception that the group who actually ACHIEVES their goals does in their minds, that the other group doesn’t.

When faced with temptation, the group that stuck with their goals saw it as a Big Reminder for them to stay the course. It reminded them of their goal and helped them stay on track.

The people who were unsuccessful at achieving their long-term goals saw the temptation as a huge obstacle to overcome. [1]

That such a small shift in perception of the exact same temptation can cause a radically different outcome.

In some cases, it can even mean the difference between failure and success.

But this doesn’t quite tell us HOW those successful people make that connection.

Another research paper, published in the October 2011 issue of Personality and Social Psychology Bulletin set out to test the idea of an “implementation intention.”

Simply put, it involves making a specific plan to help satisfy a goal.

For this study, the researchers recruited women to participate in a “healthy eating habits investigation.

They surveyed the women asking them
1. whether or not they were interested in dieting,

2.whether or not they were successful at dieting

3.and to name an unhealthy snack food that they found very tempting.

The researchers then took half of the women and asked them to form an “implementation intention.”

In this case, it was to stick to their diet, even if they encountered their tempting food.

The other half of the women who participated were not asked to form an implementation intention.

Seven days after that, the researchers asked the women how well they did in resisting their temptation.

Of course, the group that reported they were not successful at dieting, AND did NOT form an implementation intention, did not do well at following their diet and gave in to the foods they found alluring.

And as expected, the group that did report being successful at dieting, had more success at staying
the course.

But here’s where it gets interesting:

The women who reported they were normally unsuccessful at dieting, but DID do the implementation intention, improved their ability to resist temptation and succeed with their diet. [2]

Bottom line: You CAN use temptation to help you stay on track.

You just need to decide(plan) beforehand that’s what you’re going to do.

So everytime you see that temptation, it will be a glaring reminder(not an obstacle) of the fitness goals you’ve set for yourself.

Also, as part of your implementation intention, decide on a specific action you’ll take when you are faced with temptation.

For example, if you’re going out to eat at your favorite restaurant, go online and choose what you’re going to order before you get there. See, that’s your plan.

Or if you are going to be in a social situation where there will be cake, know in advance that you will drink a glass of wine instead. That’s your plan.

And this planning is powerful.

Having this all thought-out (planned) beforehand will exponentially increase your chances of success!

P.s.If you want to lose 7-12 pounds of fat every 30 days without impossible diets or long boring workouts in the gym take advantage of your FREE Fitness Consultation? (an $87 value)

During this consult, you’ll receive detailed information on how to get fit and trim that’s
tailored to YOUR body.

There’s no obligation and it’s totally and completely free.