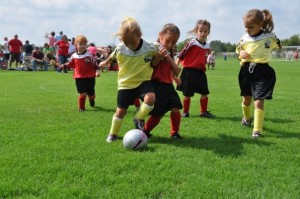 Interesting article in the NY Times over the weekend.

The long and short of it. Researchers in Denmark recruited more than 70 women ages 20 to 47 who had no history of playing soccer as children or teenagers. Two-thirds of the women were assigned to either a running or soccer group. The rest were the control group.

For 14 weeks, the women in the active groups exercised by running(long, slow cardio exercise) or playing soccer(short burst, multi-direction exercise).

After 14 weeks the women in both groups had made improvements in heart health, balance and muscle strength. But the gains were greater in the soccer group compared to the running.

Soccer outscored running in every category including maximum oxygen uptake, an indicator of cardiovascular fitness! Playing soccer led to better balance and improved muscle strength, also the sport increased the woman’s bone density by 2-3%! That’s the equivalent to reversing 3-6 years of bone aging.

But why was soccer so much better for woman’s bones and hearts? Dr. Krustup the head researcher, said that soccer gave women a more diverse workout than running. And this led to greater gains. “We analyzed the activity patterns during soccer, and we observed multiple sprints, turns, tackles, headers, and shots on goal,” he said. The researchers believe the varied activity patterns were more stimulating than the repetitive exercise patterns leading to greater adaption.

The research evidence is mounting that long slow cardio is just not the way to go for maximum results with your fitness program.

For maximum return on your workout. Use short burst multi-direction(sprinting, jumping, calisthenics, bodyweight exercises) training to get the most results in the least amount of time.

Dedicated to Your Success,