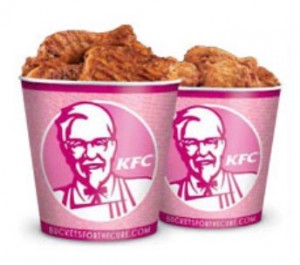 You may have seen the recent KFC commercials for their pink buckets to benefit Susan G. Komen For the Cure.  In their “Buckets for the Cure” campaign, KFC will donate 50 cents for each pink bucket of chicken sold.

Who can get down on raising money for breast cancer research?  Not me, and I won’t even try.

But when I first heard of the pairing, I did give pause, and I wasn’t the only one.  Fried chicken to beat cancer. After a little more research into the fast food chain’s campaign, I became even more wary, and you should be, too.

Komen is announcing the partnership on its website, proclaiming  “KFC and Susan G. Komen for the Cure are teaming up [to] spread educational messaging via a major national campaign which will reach thousands of communities served by nearly 5,000 KFC restaurants.”

Just what is the educational messaging?  I wonder if they will discuss the importance of a healthy diet and maintaining a healthy weight to prevent diseases, like cancer itself? Will they mention the National Cancer Institute’s findings of “an increased risk of developing colorectal, pancreatic, and breast cancer is associated with high intakes of well-done, fried or barbecued meats”?

KFC  recently released their infamous Double Down Sandwhich made of two slices of cheese and two slices of bacon sandwhiched between 2 fried chicken patties.  This ‘sandwich’ weighs in at 540 calories, has 32 grams of artery clogging fat and an astounding 1380 mg of sodium.    The rest of their menu isn’t much better, which is hardly suprising when their claim to fame is fried chicken.

KFC is going to keep on selling their chicken just like they have for years, so tossing a bit of their profits from their regular chicken-loving consumers to benefit the leading breast cancer charity is a positive thing, no doubt.  It would be ABSURD to expect that they could actually stop selling fried chicken for a period of time and offer healthier choices to buy, of which, they would donate a portion of the proceeds to Susan G. Komen.  That would be absurd, right?

We can’t change KFC’s marketting strategies, but we can vote with our wallets.  KFC knows that people who buy their fried chicken will continue to do so, and are hoping that non-regualr consumers will be enticed to buy their cancer risk raising chicken with the warm feeling of donating to a good cause.

You are smarter than that.  You can donate to breast cancer research, but don’t do it while sacrificing your health.

Donate directly to Susan G. Komen for The Cure by clicking here.

Kelly Turner is an ACE Certified Personal Trainer and health and fitness writer from Seattle, WA.  To contact Kelly with any questions, you email her at kellycturner@hotmail.com.