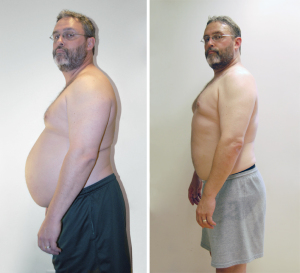 “The failure to act is much more often the product of inner, emotional resistance than external resistance. To move forward you must give up your story, whether it is excuses about your childhood, lack of education, your “bad luck”, your unsupportive family, your low metabolism, etc”
-Dan Kennedy

When I meet people at a party and they find out that I coach weight loss and fitness for a living, they’re always curious as to who I work with and I tell them…

“I work with procrastinators. I work with people who chronically put things off until the problem is so big they need help fixing it.”

And WE”RE ALL GUILTY OF IT.

I spent an entire YEAR just focusing on beating procrastination. It was my only goal and I still struggle with it.

You see something on your schedule like “go to the gym tonight” and you procrastinate and you keep putting it off, secretly hoping it will just go away.

Like magical thinking “If I ignore this extra 20 or 30 pounds I have long enough, maybe it will just go away”

But it doesn’t that extra 10 becomes 20 then an extra 30. And soon you’re in trouble because no it’s dragging you down. And this overweight person you see in the mirror is absolutely not the person you see yourself as.

And now you have a REAL problem.

Here’s a way to beat your internal resistance and procrastination from a Navy SEAL.

I read about a guy named Bobby Gassoff. Bobby grew up the son of an NHL defenseman. and went on to captain the University of Michigans hockey team.

After college Bobby was playing some minor league hockey when her felt the calling to serve his country. He quit hockey and joined The Navy SEALS.

Bobby and everyone else in BUDS training was an athletic freak when they got there. But during “hell week” the prospective SEALS run the equivalent of 3 Full marathon while carrying hundred of pounds of gear on less than 30min sleep a night(if any) for a full week.

The program is designed to seperate the the toughest from the rest.

On the second day of hell week, the skin around Bobby’s armpits and groin had been worn away by the wet sand. One of hs teammates-the winner of the Navy pentathlon and the best runner and swimmer in the group-had just rung the bell and quit.

Bobby decided he would just focus on the next single step he had to take. The thought of what he was going to have to go through for the rest of training was just too overwhelming, so he put it out of his head.

He put one foot in front of the other, then thought about the next step after that.

In a few minutes thsat trainees got to eat lunch, the instructors would call out all of the brutal activities scheduled for the rest of the day- a tactic designed to see who would be distracted and disheartened.

Now is losing 10-20 even 50 pounds the equivelant of Navy SEAL training? No not really.

When you lose focus and start to get overwhelmed by the sheer volume of the work ahead of you, you’re increasing the chances you’re going to quit.

Or even worse never get started in the first place.

Instead of thinking too broad with your focus, like “how the hell am I going to be able to get this 30 pounds off by springtime!” .

Get that done and go through the process again.

What’s your next step?

I’ll have a protein drink at 2pm.

I’ll leave work and drive straight to the gym at 6pm, if I go home I’ll never leave.

And so on and so on.

It’s like I tell new Fitness Boot Campers, not to worry about the workouts the first month.

Just focus on getting in their car and pointing it at in the direction of the gym and get here and walk in.

Not how will I feel, how much weight will I be able to lift, will we have to run, will I make it?

The workouts aren’t what you’re practicing.

The point the car at the gym and walk in is the habit you have to FOCUS on because that’s the….

What do you need to do this day this minute to overcome your own internal resistance and make this day your best.

I know you can do it.

I believe in you.

Dave
P.s. The easiest first step I know of to get started is to click here and join us for FREE for 7 Days. Heck, you can start tonight. Do it now.
Click Here=>FREE 7 Day Pass