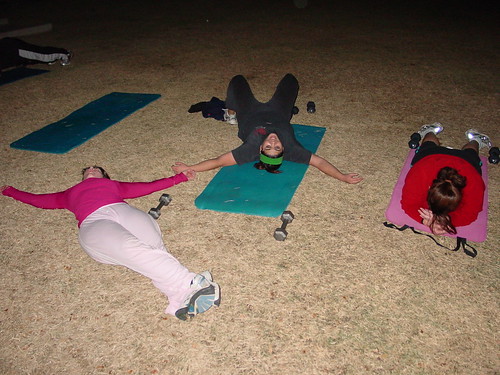 Hard Enough For Results? by davefannin

This makes sense. I’ve seen it but it’s a tough sell.

At least I’m not the one saying it: doctors claim the same thing.

Endocrinologist Dr. Ken Fujioka says that hormones cause women to want to eat more after exercise, and since a woman’s metabolism is nearly one-third slower than a man’s, those extra calories have a significant impact on their weight, making it harder for them to drop those pounds than for a man, and the average woman simply doesn’t work out hard enough to offset the difference.

Common sense would tell us that to combat this, you simply don’t eat those extra calories, good luck with that, you can literally see people’s faces glaze over when you recommend they simply eat less. Then they stop returning your calls.

So how is this fixed? Work out harder.(Remembering still you can’t out-exercise a bad diet!) How do you do that? Well I’ve never, and I mean never, had a client note how easy their training was and they feel like they could pull it off themselves.

Client:” When I have the energy to get off this floor. You’re getting a punch”
Me: “That would be a No”

Now every work-out isn’t an all-out slaughter. I’ve seen it attempted and injuries and burn-out follow quickly. And that’s as bad as no training.

It definitely helps with the motivation and pushing when a trained coach is getting you into the “5 More!” “1 More You! CAN DO THIS!” Zone. And if you have a trainer that doesn’t get you excited enough to get after it and isn’t invested enough into you to get excited about your progress get rid of him or her- today.

The video notes that if you are talking to your friends, or able to read a book, you are not working out hard enough. Interesting to note that absolutely all of the people that were on the cardio machines were talking and reading and um. “power walking”. I think I threw up in my mouth a little.

So bottom line is you have to push.